How the Court Was Born

When the Constituent Assembly set about drafting the Constitution of the Italian Republic, it made a fundamental choice in attributing a “supralegislative” force to the new Constitution, so that “ordinary” laws could not amend it or derogate from it. The rights and obligations ratified by the Constitution, and the rules that guarantee the balance of power among the various constitutional organs, were thereby protected even from laws of Parliament. To safeguard this choice, the Constituent Assembly provided in a section entitled “Guarantees of the Constitution” (Title VI, Part II) for a Constitutional Court. The Court was charged in Article 134 with the task of passing judgement “in cases relating to the constitutional legitimacy of laws, and acts having the force of law, of the State and the Regions; on conflicts regarding the allocation of power among the branches of the State and on those between the State and the Regions, and among the Regions; and on charges brought against the President of the Republic, according to the Constitution,” in cases of high treason and attacks on the Constitution.
This last duty was originally accompanied by the task of passing judgement on government ministers for crimes committed during the execution of their duties. However, this power was exercised only once, in the Lockheed bribery case in 1979, and was subsequently abolished by a constitutional amendment in 1989 which transferred this duty to the ordinary courts.
Another of the Court’s functions, added with Constitutional Law 1/1953, is to review the constitutionality of requests for abrogative referenda (referendum abrogativo), in which citizens are called upon to vote whether to repeal a statute.

The Slow Implementation of the Court

The Constitution itself provides for the institution of the Court and its basic functions (Art. 134), its composition (Art. 135), and the effects of its decisions on statutes (Art. 136). Further regulation of the Court and its activities was, however, deferred to subsequent constitutional laws and ordinary laws which had to be approved before the Court could concretely be formed and begin to function. In February 1948 the Constituent Assembly approved Constitutional Law No. 1/1948, which stipulates who can petition the Court and in what way. However, it took another five years before Constitutional Law No. 1/1953 and ordinary Law No. 87/1953 completed the regulation of the Court. Following new elections in 1953, further delays were caused by problems in reaching the agreement necessary to elect the five judges nominated by Parliament by the necessary three-fifths majority. The first full membership of the Constitutional Court was only finalized in 1955. At this point the Court was able to establish itself in the Palazzo della Consulta and to set up the necessary organizational structures, adopting its internal regulations known as the “norme integrative.” Thus, seven years after the Constitution came into force, the Court was finally able to function.

The First Hearing and the First Question

The Court’s first public hearing (udienza pubblica) was held on April 23, 1956. It was presided over by the Court’s first President, Enrico De Nicola, who had been the provisional Head of the Republic and, for a few months, the President of the Republic.
The first question regarded the constitutionality of a provision of a 1931 law on public security which required police authorization to distribute leaflets or to put up posters, and which punished any unauthorized distribution or posting. The issue was raised by no fewer than thirty different criminal judges throughout Italy, who questioned the compatibility of the law with Article 21 of the Constitution, which guarantees freedom of expression. Arguments that the law was unconstitutional came from some of the most illustrious Italian lawyers and jurists of the time, including Costantino Mortati, Vezio Crisafulli and Giuliano Vassalli, as well as Piero Calamandrei, a member of the Constituent Assembly and an expert in procedural law and constitutional adjudication, and Massimo Severo Giannini, former Head of Cabinet at the Ministry for the Constituent Assembly.
As an initial matter, the Court had to decide the controversial issue of whether its jurisdiction to review the constitutionality of laws extended to acts passed prior to the enactment of the Constitution, such as the 1931 law at issue, or whether it was instead limited to laws approved afterwards, as the Advocate General of the State argued. This issue was of crucial importance given that a large portion of the legislation of the Italian state in force at the time and for many years to come had been enacted during and before the Fascist era. Limiting the scope of constitutional review to post-1948 legislation would have meant de facto preventing the Constitution from becoming truly operative in many sectors, thus postponing the realization of many constitutional guarantees indefinitely. The Court ruled that all laws, enacted both before and after the 1948 Constitution, could be reviewed and had to be declared invalid if found to be incompatible with the Constitution. The principles of the Constitution refer not only to the legislature, but to everyone-citizens, public authorities and judges alike. The contested legal provision on public security was thus declared unconstitutional. It was this seminal Decision No. 1/1956 that paved way for innumerable later judgements which “swept away” many provisions in old laws that were incompatible with the new Constitution, in fields where Parliament had failed to do so on its own.

President Cartabia meets the press after his election (11 December 2019) 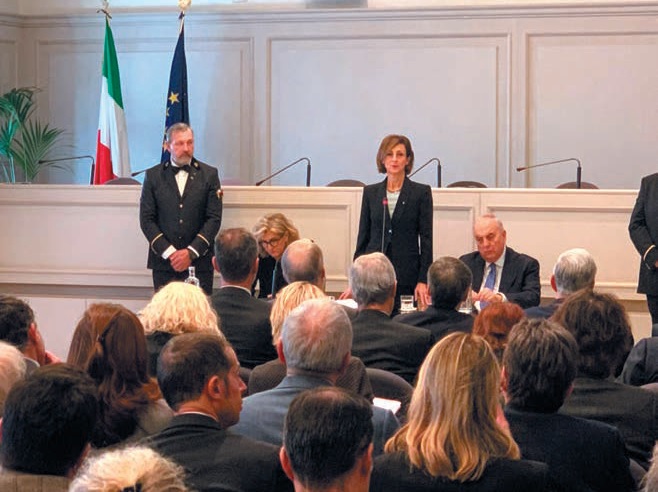 Since 1956 the Court has issued literally thousands of decisions. In the last three years, between 300 and 500 cases were brought before the Constitutional Court each year; in the same period, the Court decided and published (grouping together similar cases) on average approximately three hundred decisions. The extraordinary work commitment required to carry out the Lockheed bribery trial in 1978 and 1979 created delays in the Court’s work on other cases. This backlog was cleared with an exceptional organizational effort, carried out under the presidency of Francesco Saja. The Court has since managed to keep up with the flow of cases filed each year.
At the beginning of the calendar year the President of the Court makes his annual public address and presents a report on the work of the Court during the previous year, giving an account of the most important decisions and statistics on the Court’s activities. The reports are printed and are available for the public as are the decisions of the Court and the acts containing the Court’s judgements which are published every Wednesday in a special issue of the Official Journal (Gazzetta Ufficiale della Repubblica). Today, the texts of the Court’s decisions, reports and other documentation can be consulted on the Court’s website (www.cortecostituzionale. it), as well as in other specialized publications and databases.